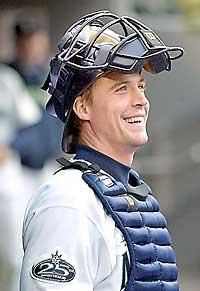 In the waning Kingdome years and the early days of Safeco Field, Lorri, my wonderful wife took an interest in the Mariners.  Yeah, she’s kind of a bandwagon fan, but she would follow the game closely, whether we were in the ballpark or watching on television. She loved Little Joey Cora, Junior, The Bone and the Big Unit.  But if you asked her who her favorite player was, it was always the same.

Dan Wilson, the Mariners catcher. Why?  He was just really good.  The best player in baseball.  The best catcher who ever played the game.  Dan Wilson should be in the Baseball Hall of Fame.

Know-it-all me would snort and shake my head and have another beer.

It wasn’t until after Dan Wilson retired that I came to appreciate what a wonderful ballplayer he was.  Here is something to consider. Dan Wilson’s first year in the majors was 1992 with the Reds.  He came to the Mariners in a trade that sent Erik Hansen and Brett Boone to Cincinnati for Wilson and reliever Bobby Ayala in 1994, and he was the starting Mariner catcher until 2004, when he tried to retire, but came back for 11 games in 2005.  So, 16 years since Wilson retired.  How valuable was he to the team?  These are the players who were the starting catchers since Wilson’s farewell:

So, over 16 seasons, the M’s called on ten players to fill the role Wilson held for 14 years.  It’s not that the other players didn’t have good years, or didn’t have some aspect of their game that was good, they simply didn’t provide the consistency that Wilson offered throughout his career. Note: In the case of Jesus Montero, all parts of his game were bad.

So how good was Dan Wilson.  Usually when I think of catchers and break down their numbers, there are three things I look for: how well do they handle a pitching staff; how good are they defensively, and finally how good are they at the plate?

Let’s start with the latter, because it’s the easiest to quantify.  Dan Wilson played at a boom time in offensive stats.  Mark McGwire, Sammy Sosa and Barry Bonds were setting home run records-with a little bit of help.  Even Brady Anderson hit 50 dingers in 1996.  Everyone was doing it. Dan Wilson, not so much.  Catchers weren’t expected to hit a lot, but Mike Piazza and Ivan Rodriguez were stand-outs.  Wilson hit a pedestrian .262/.302/.382 career slash, and 80 career OPS+. Not terrible numbers, but below major league average for the time he played.  However, these numbers were pretty consistent throughout his career. And there was that May 3rd game in the Kingdome in 1998:

One of Wilson’s 88 career homers.

So if Dan Wilson didn’t have a blistering offensive career, how did he handle pitchers?  This is the hardest to measure.  There are no stats for how Wilson juggled a staff that included Randy Johnson (both the good Randy and the bad Randy,) Jamie Moyer, Bobby Ayala, Norm Charlton and Kazuhiro Sasaki.

After he was acquired from the Reds, manager Lou Piniella immediately held Wilson responsible for the success of the pitching staff.  If Randy Johnson or Chris Bosio were getting hammered, it must be the pitches Wilson was calling.  As we all know, Piniella wasn’t shy about his opinions, especially about pitching. Wilson quickly became a student of scouting reports and preparing pitchers for games. In Michael Emmerich’s “100 Things Every Mariners Fan Should Know,” Piniella characterized him as “a caring catcher.”  Chris Bosio said “He calls a good game. He can adapt to pretty much anybody’s style.” It’s probably no accident that Randy Johnson and Dan Wilson went in to the Mariners Hall of Fame together in 2012.

Today there are all kinds of newfangled statistics to measure catcher’s defense.  Pitch framing, stolen base runs saved are two to be sure, but they started measuring these at the very end of Wilson’s career.  One way we can calculate things is to look at wild pitches and passed balls in a career.  Wilson was grew up a hockey player and played goalie and he used these to his advantage to keep balls from getting through him.  It’s important, because if a pitcher has confidence the catcher can block balls in the dirt, then he’ll throw that splitter that explodes at the bottom of the strike zone, or the curve in the dirt a batter may swing and miss. How good was Dan Wilson at keeping balls in front of him instead of through him?

Two numbers-passed balls and wild pitches.  For his career, that’s 1281 games and 10,362.2 innings, Wilson allowed 42 passed balls, those are physical mistakes he made. Wilson also allowed 318 wild pitches, those are bad pitches over, under and around him by the pitchers he caught.  I often think these all occurred in one really bad game the Big Unit was having.

Remember those numbers 42 and 318.  How do you compare.  Well, I started with Baseball Reference because they have career lists of everything, including career passed balls.  It starts with Pop Snyder  who played mostly in the American Association from 1873-91 with 763.  Remember, no fancy gloves or shin guards in those days, so Snyder probably also was on the career lists for most bruises. The list ends with Tom Dowse, 45.  Dowse played three seasons! To be clear, in 1997, a year in which Wilson caught all or part of 144 games, he had one passed ball. Let’s compare to some guys you might recognize.

To be fair, each of these catchers, the first four in the Hall of Fame, caught more innings than Wilson, Rodriguez over 20,000 innings. but the numbers still speak for themselves. It’s not that Johnny Bench was a bad defensive catcher, it’s that Wilson was just really good at this aspect of the game. 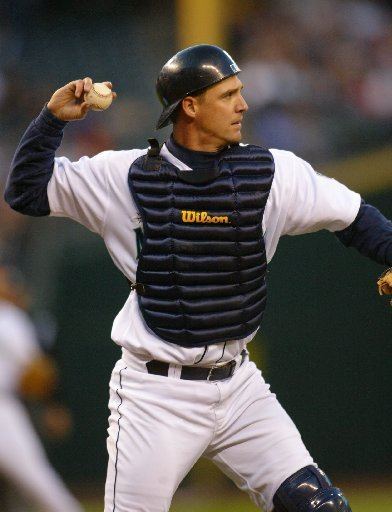 So let’s just summarize and compare.

Okay, one more defensive nugget. Baseball Reference lists fewest errors by a catcher.  The lowest number is 45.  That’s the number of errors made by Dan Wilson.  Except his name isn’t there, it’s J.C. Martin, a mostly part time catcher with a bunch of teams but notably the Miracle Mets in 1969.  His 45 errors occurred in 4553 innings or a little more than one third of Wilson’s. Dan the Man was good.

One final story.  I began by telling how much my wife loved Dan Wilson.  It seems this was not uncommon.  Married women loved Dan Wilson.  Larry Larue commented on this in his book, “Major League Tales.”  Wilson, self-effacing as always, shrugged this off. Lorri admired his work with adoptive children, smiled when Dan and his wife Annie were able to adopt Sofia from Bulgaria, and smiled even wider when Annie became pregnant.

One Christmas, I don’t know how many years ago, Wilson was signing Christmas ornaments and other bits for one of his favorite charities.  I decided Lorri needed to have one of these for the tree.  I drove up to University Village in Seattle, some 40 miles from my house.  I got in the surprisingly short line, as Wilson and Sofia, moved the line along.  When it was my turn I smiled and shook his hand, and told him how much my wife admired his play.  His only response was a weary “Really,” as though he’d heard it a thousand times before. maybe that day.

All statistics from FanGraphs and Baseball Reference.com

A futile fight against entropy or 'Every man should have a hobby'? Either way it is a blog on tabletop wargames, board games and megagames