75% of baseball is pitching. Right now the Mariners don’t have much of it. With Felix Hernandez and Wade Miley on the DL, and Tai Walker a big question mark,  and Nate Karns relatively ineffective in seven of his last eight starts, it is not a surprise the M’s have plunged from a season zenith of 28-18 and first place in the AL West to 37-36, in third place in the division and 10 games behind the streaking Rangers.

To give you a quick idea of what has happened pitching-wise, here are some quick stats, easily accessible from Baseball-Reference:

If these numbers don’t look great, it’s because they include the numbers for the past month. They’re terrible. For the past 28 day, covering 26 games in which the M’s are 8-18, here are those same numbers:

As you can, see these numbers are much worse. Consider these 26 games represent slightly more than a third of total Mariners games played, and I can come to only one conclusion: Yikes!

All of the short starts, injuries and fourth inning meltdowns has put additional pressure on the bullpen.  In some cases they’ve pitched well, but it is a relief corps in chaos, throwing in roles that weren’t intended, and overused in a fashion that exposes their weakness. That they have surrendered a lot of late runs should not be a surprise. But there are some commendations to give out as well. Mike Montgomery and Vidal Nuno have been tossed into to some very difficult situations, and generally handled them well. Joaquin Benoit, not so much.

Also deserving of some praise is Jerry Dipoto.  Faced with this situation, the previous regime would have assumed their Winston Churchill faces, adopted a stiff upper lip and simply stated “this is our team,” and watched the season spin away out of control.  Though that may still happen, Dipoto has acquired as much pitching help as possible on the cheap.

None of these moves represent the second coming of Nolan Ryan, and they are classic “buying on the cheap.” But it is something more than throwing up of hands and stating, “woe is me.”

The M’s bit the bullet on Nori Aoki, and sent him to Tacoma to work on his swing mechanics. Aoki hit a meager ..245/.323/.313.  He was never going to be “the man” offensively, but he was seen as a complimentary piece who could contribute offensively with on base and baserunning skills and average outfield defense. Unfortunately his slash his well below his career numbers of .282/.350/.378.  His below average defense in each outfield position doesn’t contribute to his value either.

The M’s have opted to carry David Rollins as an extra bullpen piece rather than adding to their stable of outfielders, currently consisting of Nelson Cruz, Leonys Martin, Seth Smith, and Franklin Gutierrez with Sean O’Malley filling in when needed. Boog Powell, a player the M’s were looking at as a future outfielder was given an 80-game suspension for violation of the league’s PED policy.  This is Powell’s second offense.

The M’s managed to eke out a pair of wins against the Cardinals, as they open their homestand.  They’ve peered into the brink of the abyss of another losing season and stepped back, even if momentarily.  Only 2.5 games out of the second wild card, hopefully the M’s have righted the ship enough to play decent ball while waiting the return of the injured, ineffective, and the trade deadline.

Their record during that time is 7-6.

Why not more wins?  Because their starting pitching has been B-A-D, bad. I envisioned the starting pitching on this year’s M’s as a real strength, while the offense would be better but only incrementally so.  Wrong on both counts.  Well, maybe wrong.

On May 22nd the Mariners returned home from their 5-1 road trip, taking 2 of 3 from Baltimore and sweeping Cincinnati.  The won their series with Oakland and promptly fell into a funk, swept by an awful Twins team, seeming to recover against San Diego at Safeco, but looking very bad in two games in San Diego, and looking bad in the opening game against he Rangers. These results are chiefly because of bad starting pitching.  Let’s review:

The M’s are now their second time through the rotation in which at least three of their five starters have been terrible. Paxton (and Felix, when he returns,) Miley, and Walker have got to improve if this team is to win consistently AND spare the bullpen from repeated overuse.  Walker has pitched poorly in five of his last six starts.

So what’s to be done?  I have no idea.  Rub a lucky rabbit’s foot.  Pray to the baseball gods?  Hope for the best?  The M’s have done best when their pitching is performing well. About 75% of baseball is pitching. It won’t matter how many runs the Mariners score if you can’t stop the other guy.  If you’re ready to point to Thursday’s exceptional game, the Mariners have only done this once in their 40 years.

June and July’s schedule is packed with the good teams. Not only will they hit well, they’ll pitch better.  Don’t expect Cleveland’s excellent staff to surrender 14 runs in a Mariners comeback bid. Watch the offensive numbers all you want.  They’re fun, but they won’t win without effective starting pitching. 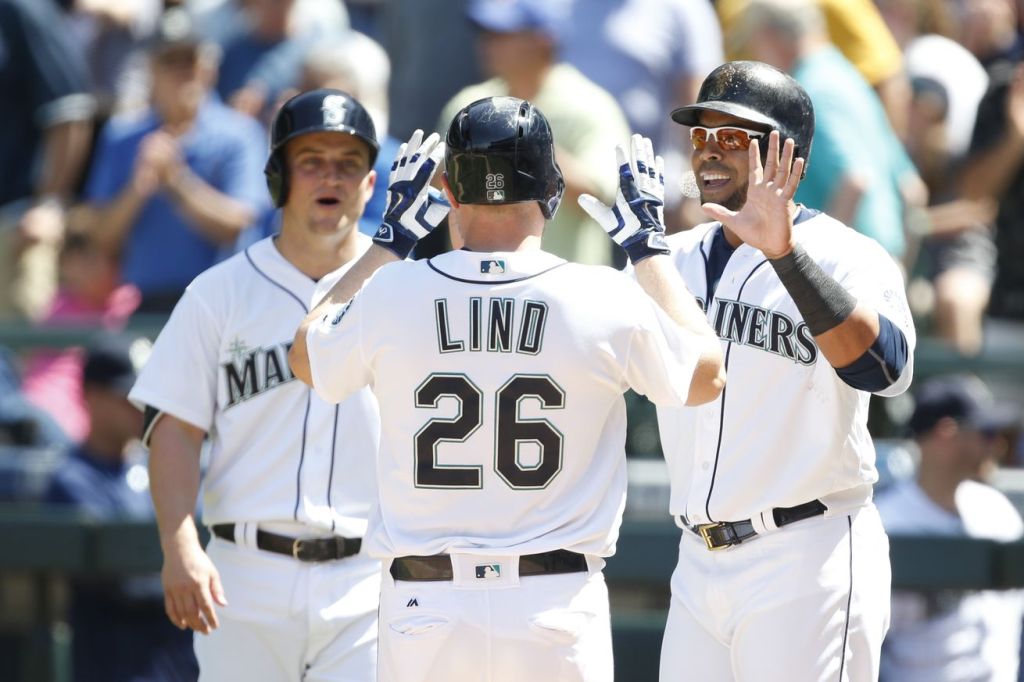 I promised to withhold judgment of the Seattle Mariners until they’d played 50 games.  Now I’m back, a day late and a dollar short, as usual.  You may recall I predicted the M’s would be at best an 83 win team and not make the playoffs.  I reasoned that the team was counting on too many bounce-back seasons from too many players for everyone to pull together individually successful performances to win as a team.  I specifically pointed out the bullpen as a critical weakness that would undo the work of a pretty solid starting rotation.

Okay, I admit it, I don’t know anything and I was wrong. While I’m not going to guarantee anything, this team should have the legs to remain in the hunt until the season’s end, competing for a playoff spot and perhaps a division crown. I’ll raise my pitiful win prediction to 88 wins. This, of course, means they’ll go on a prolonged losing streak and it will all be my fault.

Two reasons this is not a fluke

Yes these are big numbers, but they are not unimportant.  The Mariners are second in the American League in runs scored with 256.  They trail only the Boston Red Sox, who are scoring runs fast enough to suspect that Jackie Bradley, Jr., Xander Bogaerts and David Ortiz (I hate that guy) are some kind of super villains.) Not to be forgotten, the pitching staff has allowed 191 runs.  That’s one less than the White Sox in one less game played to take the lead for stingiest pitching staff in the American League. Those are two important reasons for the Mariners success–they’re scoring a bunch and they aren’t allowing a lot of runs to be scored.  Their run differential is +65 and trails only the cudgel that is the Red Sox.

Not the same ol’ Mariners

This is where things become a bit more anecdotal.  These are not the 2015 team.  Yes, it hits a lot of home runs.  That’s probably what Jack Zudrencik planned for when he brought on Nelson Cruz last year.  But they do lots of things differently.  Lots more singles up the middle to drive in runs.  Not a lot of solo home runs.  Plenty of sacrifice flies.  Loads of homers with guys on base.  Earl Weaver would be proud.

But by the numbers, they are good too. They aren’t scoring all those runs by accident. Yes lots of homers, but they are second in the league in On Base Percentage.  Never thought I’d see that, with .327.  They are third in slugging.  They are second in wRC+ or Weighted Runs Created. with 113. It’s not just a few guys contributing as Leonys Martin, Adam Lind, and Franklin Gutierrez begin to find their strokes and help out the Canos, Cruz, and Seagers.

There are still things they don’t do well. With the exception of Martin, they are poor base stealers. They make mistakes on the basepaths-as per Saturday night’s walk-off double play hair-pulling, eye-poking, dope-slapping TOOTBLAN to end the M’s comeback effort against the Twins. For those not in the know TOOTBLAN equals “Thrown Out On Basepaths Like A Nincompoop.” I would suggest the M’s are likely rated poorly on the TOOTBLAN spectrum.

I believed this team’s bullpen would be godawful.  Maybe not as bad as last year’s bullpen, but bad enough to cost a demoralizing number of games. So far, I’ve been wrong about that. And what’s more, I’m glad I’m wrong. Just by way of simple comparison, last year’s bullpen was worth 1.1 WAR for an entire season. They were in the bottom of third of the league in K/9, BB/9 allowed, in ERA, and BABIP allowed.

They’re not perfect, and it seems to me they are easily overworked.  They are good at supporting a rotation that is doing its job, but vulnerable if the starters don’t eat innings.  Even so, their work is a very pleasant and important surprise.

Life is not perfect with this team. Here are a few things that concern me:

This bullpen still has guys I worry about, guys the M’s don’t seem to want to use in high leverage situations.  They include Steve Johnson.  He’s pitched okay, but it doesn’t seem like Servais uses him when the game is close, and if you don’t trust your guys to use ’em when you need ’em what use are they to you?  Same with Joel Peralta, who has actually given up a few long balls we’d like to have back. This bullpen has also failed when overtaxed.  The Angels sweep occurred mostly because the rotation didn’t do its job and the bullpen was asked to perform on too little rest.  It’s just not deep enough. It may become a more apparent issue when we have our run of games against better teams.

The rotation is meh

I truly believed the rotation would be much tougher than it has been.  Felix and ‘Kuma have been a crapshoot in each of their outings.  Felix’s last start against the Twins was a disturbing reminder of last year’s difficulties. There is more pressure on Miley, Walker and Karns to perform because there is no certainty the two veterans are going to rescue the team.  It also puts additional stress on the bullpen.  The consecutive implosions by Felix, Miley and Walker was dangerous, and it’s super the offense and Nathan Karns rescued them. The rotation has to pitch up to its potential or other answer will have to be found.

I’ve already said enough about these guys, but their contributions thus far are huge.

I’ve already written a lot about this guy too, but he’s added so much, contributing in the field, at bat and on the basepaths.  Get healthy sir, you are missed.

As we move into June, with the trading deadline in view, the M’s have certainly begun considering how to address their needs.  Another arm or two could provide more depth and security for the bullpen into a playoff run.  Perhaps the M’s should look into another starter.  While there are lots of things I like about Nori Aoki, another player who can provide a little more offense and better defense in the outfield would improve this team.